General
July 11, 2012 by robert
0
Early morning start, great breakfast of Indian hashbrowns and eggs and masala chai.
We bade our farewells and shared our thank yous, taking Bikram and Ram DePundit and the village of Tharu with me in my thoughts and off we go! 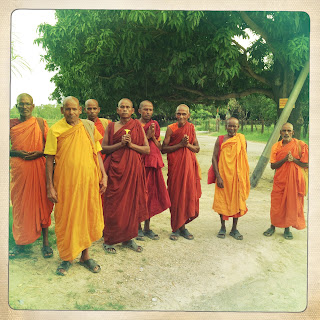 A few hours drive and we rocked up to Lumbini, special place out of the way to the Buddha Resort – our home for the night.

The holy site of Lumbini has ruins of ancient monasteries, a sacred Bodhi tree, an ancient bathing pond, the Asokan pillar and the Mayadevi temple, where the precise place of birth of Buddha is located. Pilgrim from around the world chant and meditate at the site from early dawn to dusk.

We visited different Buddhist temples all built by different countries like China (the one we went in), Korea, a German Buddhist monastery, and our guide Dinesh told me there are plans to build a total of 49 temples here –  which is just absolutely ridiculous!

Buddha would be weeping at this masquerade of freaking temples, each one trying to be better or different from another – which goes completely against what he was trying to teach the world. Go figure!
He specifically said, I don’t want idols and images of me all commemorating my existence and of course we do the opposite!! This mania of building temples would just destroy all the natural flora and fauna and the whole essence of Buddha’s enlightenment will be blighted… 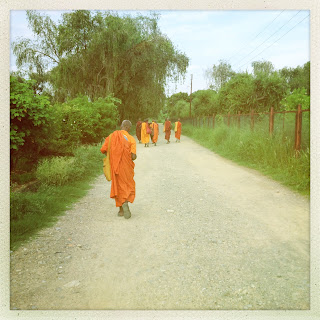 To top it off we embark on this magical walk to touch the ground where Maya Devi (Buddha’s mother) gave birth to him all those centuries ago. There is a building protecting the apparent exact spot where Maya Devi gave birth under a tree. There is no tree, only a stone in a glass casing surrounded by brick structures…I asked Dinesh about the tree, he said of course the original tree is long gone and a new one grew but they cut it down to build the protective building around the spot where Buddha was birthed.

I asked why they just didn’t build around the tree and he looked at me stunned and said I honestly don’t know, never thought about it like that!!Hmmmm
For me what was magical was putting my hand in the pond where Maya Devi bathed herself, then walked 25 steps to this tree and gave birth to Buddha. She was on her way to her parents’ house as was the custom but she never arrived, they returned to the palace and she died a week later. Her sister then married the king and raised Buddha.
I learnt that Buddha parents had him late in their years as Maya Devi could not conceive but that changed and had this dream of a white elephant and all knew this child was one of a kind…
I took the water from the pond and rubbed it on my belly and my face and just sat there for a moment listening to these monks chant near a great Banyan tree. 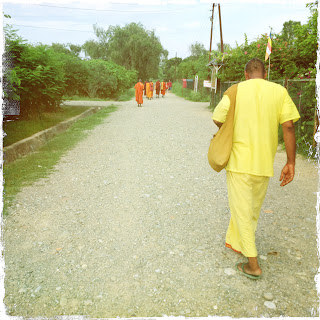 Tak Bir came to get me and as I was walking to the group, this young monk with light brown eyes beckoned me to come for a blessing and tying of string round my wrist, I said a prayer, put some money on the tree and then followed Tak Bir to the monks to blessed us with “Bavatu Sava Mangalam” – May all being be happy!!

Did some shopping, the group sweetly offered me an orange ice cream and we went back to the lodge for our last night in Nepal 

I really wasn’t ready to leave, even asked Tak Bir if I could change it but it was too late, should have asked in Kathmandu..all good, I will be back to visit Pokhara, as they say you have no visited Nepal if you have not gone to Pokhara. 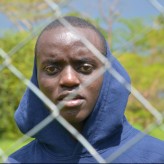